I have a confession to make.

I’ve lived in Canberra for well over 30 years and I like to get out and about a fair bit in my home town, but until just recently I had never been to Tidbinbilla Nature Reserve. Never! Given that Tidbinbilla is a pretty large and impressive nature reserve bursting with the best of Australian native animals and it’s got an amazing reputation in Australia and even around the world, it’s a  tad embarrassing.

Despite promising myself year after year I’d get out there (I mean, for goodness sakes it’s only 40 minutes out of the CBD), it took an invitation from Graham from Canberra Urban Adventures to actually get me there.  And of course now I’ve finally made it, I’m planning to go back again soon with the little munchkins in tow.

Tidbinbilla Nature Reserve is a protected area nestled at the base of the Tidbinbilla mountain ranges next to Namadgi National Park.  If you want to get up close and personal with a range of  Australian native wildlife in its natural setting, this is the place to be!

We’re talking kangaroos, wallabies and koalas of course, but you’re very likely to come across a whole range of other animals, birds and reptiles as well. Perhaps an emu, or a potoroo. In fact, Tidbinbilla is home to over 130 species of native wildlife. We didn’t see that many, though at the Wildlife Sanctuary area of five ponds I did encounter my first platypus in the wild! They’re fairly shy and elusive creatures so that was a bit of a thrill, rubbish photographs of said platypus notwithstanding.

I’m quite a fan of taking tours with locals as you get a lot of inside knowledge and get to discover places and facts you wouldn’t otherwise find out about. Reading the brochures and signage is one thing, but having somewhere tell you the stories is another. One half of Canberra Urban Adventures, Graham, is an ecologist by training and delights in sharing his love of wildlife and knowledge of the area. And I just love having someone around on a tour so I can ask all the things and get sensible answers.

You need a car to visit Tidbinbilla as it is a fair way out of Canberra (well 40 minutes remember, but this is by Canberra standards because we generally complain about driving more than 15 minutes anywhere) and you need a car to drive inside. (Actually, you could ride a bike, but it’s a fair hike. We did do a fun 5 kilometre glide down a big hill on an electric bike, shooting past bemused kangaroos, which was rather fun.) The guided tour is perfect for out-of-towners without transport.

The range of landscapes within the reserve is quite surprising: mountains, eucalypt forest, woodlands, open grasslands, wetlands, each different but each lovely and each home to different species.

Unfortunately the reserve didn’t fare well in the terrible fires that ripped through Canberra in 2003 and most of the reserve was badly burnt. Many of the animals didn’t survive sadly, and the koalas were especially hard hit as they move slowly on the ground. Only one koala resident survived, albeit with burns and had to be nursed back to health. They renamed him Lucky, of course, and we went on to live for many more happy years after that, eventually dying of old age not too long ago.

The area around Tidbinbilla is steeped in cultural history as it’s home to the Indigenous Ngannawal people dating back 25,000 years ago. There’s also evidence of European history with homesteads and farming dotted through the reserve. You can take an Indigenous tour to learn about the traditional history or you can stay overnight in one of the homesteads.

The nature reserve is also a leader in conservation work and operates a number of breeding programs which have been very successful, focussing on threatened species, including the Northern Corroboree Frog (they’re the bright yellow and black ones), the Southern Brush-Tailed Rock-Wallaby and the Eastern Bettong.

As a bonus, on this tour you also get to take in a bit more of Canberra with interesting commentary on the side to pick up some local knowledge and tit bits. This includes dropping in at the Canberra Deep Space Station and learning more about the role Canberra played in the moon landing and how we track space craft in our solar system in conjunction with NASA. 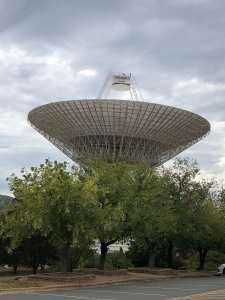 Discovering Tidbinbilla by yourself

There’s a number of ways you can discover Tidbinbilla yourself, particularly if you live locally. If you self-drive, there are many guided tours with rangers and activities on offer. This includes 22 different walks to choose from, ranging from 15 minute strolls to full day hikes. Wear your sensible shoes.

There’s an entrance fee but really it’s as cheap as chips, charged per vehicle. And the good news is if you buy an annual pass (currently $36), you get to go back as many times as you want during the year.

I’m definitely going back. Perhaps next time I’ll nail a decent photo of a platypus.