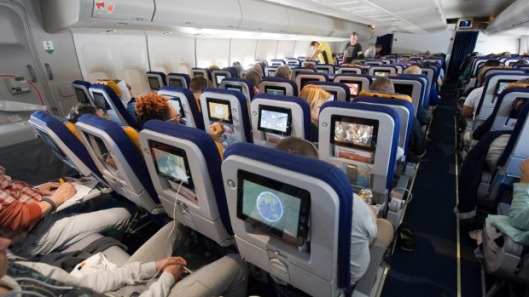 Last week the internet had the world divided, although that in itself is hardly news. That’s largely what it does. On this occasion it was over the bad behaviour of a couple on a plane and the ever-vexing topic of reclining seats and when it’s acceptable practice in the world of air travel and when it isn’t.

So, what happened? Basically a woman reclined her seat for most of a flight, put it up on request for meal service and then reclined it again afterwards. The man behind, in the back row and unable to recline himself, then took to punching the back of her seat continually in retribution, which she duly recorded. Such grown ups!

The big question became was who was right and who was wrong, and of course the whole world wanted to be involved. I was pretty surprised though that opinion ended up being pretty evenly divided, with half supporting the woman and half supporting the man behind. (Disclaimer: I’m actually taking the word of reports on that as I have neither the time nor inclination to analyse it myself.)

What is wrong with you internet, and all you people who voiced opinions?? One person claimed reclining a seat is ‘literally the worst thing you can do on a plane’. Really, reclining a reclinable seat is the worst thing you can possibly do on a plane? I can think of at least a dozen, most of them too unpleasant to write here. How about hijacking? Surely that’s worse? And do not get me started about the incorrect use of the word ‘literally’, one of my personal bug bears.

While I admit I don’t know all the relevant details of the situation, and no doubt the woman could have been more considerate, on what planet is it okay to punch someone’s chair ad nauseam just to annoy them when they’re doing something with the chair that’s it’s actually designed to do? Unsurprisingly some saw it as some sort of female vs male debate (nuh, don’t just pull out the automatic feminist responses. This was not about sexism: the participants just happened to be of opposite sexes).

And then World War 3 broke out (not literally!) with a multitude of opinions and rantings, many of them unnecessarily unkind and rude.

What is wrong with us? That:

Of course it’s not just about seats on planes. Almost any topic brings out the same sort of behaviour online, a social phenomenon of our times. Culture wars, political beliefs, vaccination, climate change, controversial people – anything can lead to irrational rants and vilification.

I’m continually gobsmacked that so many people think it’s okay to be blatantly rude to others on social media. Twitter in particular seems to lend itself to a very nasty level of personal attack and vitriol. I’m not sure if those who partake in those attacks are just that way inclined and would do so in their personal conversations or with work colleagues, or whether the veil provided by a SM platform gives rise to an extra layer of nastiness.

When did we become so horrible? I’ve been putting some thought into it recently and it seems there’s quite a lot of research being done on the topic and many others are also considering the question: Is social media making us ruder? One school of thought is that it might have something to do with not making eye contact, but surely it’s more complex than that?

It’s something I find incomprehensible so I can see I might be doing my own research into it, without being drawn into the mire of hatred.

And just in case anyone is wondering about my opinion on reclining seats on planes, here it is. Yes, of course you should be able to recline your seat during travel (why else would they build them that way?) but clearly not during meal service. That’s because that’s the rule and otherwise makes eating onboard a pretty unpleasant task. I rarely do it on domestic (short haul) flights and yes, it’s a pain when the person in front does so sometimes I might then too, but that’s the game you play buying tickets in economy. If you’re concerned about leg room or avoiding the back non-reclining row, do your seat allocation early and choose other seats, or pay the surcharge for more leg room. I’ve been paying to have jeans turned up for my short legs my entire life – sometimes that’s just how things turn out. But when I’m on a plane for 12 hours straight, some of that time I’m going to have my seat back.

So, people of the world, whether we’re on a plane or on Twitter, my take is that we should just try to be nicer to each other. Have different beliefs, voice them if you want, want to do different things—just don’t be bloody nasty! You never know, it might just come back to you in the form of karma.

Have you ever had a situation on a plane when travelling? Do you think people should be able to recline. Do you think we’re just becoming a more abusive society?