It’s 20 years since the 2000 Olympic Games were held in Sydney. It was the year Australia put on a great big party and invited the world, even though we ended up doing most of the partying ourselves.

I was seriously excited for those games. I’m not generally a great sports fan but this wasn’t just sports: this was a world event, and in 2000 it was playing out in our own backyard. History in the making.

The opening ceremony was the big ticket item. So big you had to go in a lottery draw to win the chance to buy a ticket. I desperately wanted to go but didn’t manage a win. Instead I counted down the days until it was on and watched every second of it live and pretended I was there. I bought the CD soon after and sang along madly with John and Olivia and Nicky and Tina and Vanessa too, although I could never get anywhere near those ear-piercing screams she emitted at the end of her song fit to burst an eardrum.

It was a spectacular opening and everything we hoped it would be, from our favourite singers, extraordinary visuals, our history summarised in dance and symbols, and horses galore galloping to the rousing strains of The Man from Snowy River. Well apart from those four excruciatingly long minutes when the lighted cauldron failed to lift as it should, and left Cathy Freeman standing in front of the world expectantly, a flaming torch held aloft in her hand and a torrent of panicked expletives in her ear, waiting for something to happen. What a remarkably calm performance she put on, slowly turning around at one point as if it was orchestrated. We watched with bated breathe and white knuckles hoping something would happen and thankfully finally it did as the back up plan kicked into gear, luckily just seconds before all the gas ran out entirely and we were shamed before the entire world. We all breathed a big sigh of relief and cheered some more. How proud we were to be Australian. 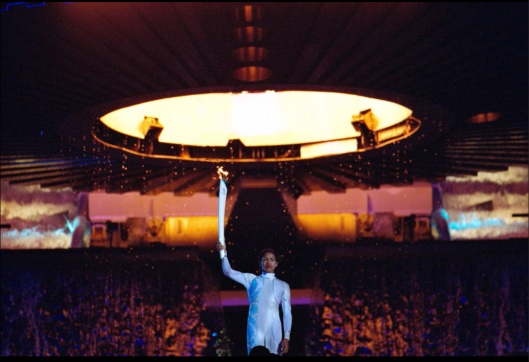 This was possibly a once in a lifetime event and we were super keen to go along and be part of the event as a young family. We travelled up to Sydney to attend the modern pentathlon event. I didn’t even know what a modern pentathlon was before we went, but it was excellent value and suited our budget and seemed to have our name written on it. In case you’re wondering, it consists of five events: fencing, shooting, swimming, horse riding (show jumping) and (3 kilometre) long distance running. That meant it kept us busy for the whole day following the competitors around the different events and venues.

As it turned out the Australian guy didn’t do all that well (Robert McGregor was his name, I had to look that up) and he came 20th out of 24th, but as he bowed out of contention for a decent placing he ‘handed ‘over the crowd to his Italian competitor instead so we all started barracking madly for him instead.

I can’t remember who won. I do remember though how friendly everyone was and how much fun we had. The crowds were huge, a solid seething mass making its way down Olympic Parade at Homebush, but no one was in a hurry and no one pushed or shoved. Everyone was just happy to be there and that’s what made it so extraordinary. (It was also extraordinary that the ever-smiling volunteers didn’t disappear entirely under their massive, multi-coloured vollie-outfits.)

In fact, the mood for the day was set on the way there. With an 11 and 13 year old in tow, we were wandering along a main road heading towards the bus stop to catch the designated Olympics bus. We saw it coming and had a bit of a vain attempt at running up the hill towards the stop but gave it up as a lost cause and resumed our walking pace. As we got to the top of the hill, lo and behold, the bus driver had seen us (the kids and backpacks must have made it obvious where we were headed) and was waiting for us! How could that be? Bus drivers in Sydney don’t wait for you! So we picked up our pace and boarded the bus, and then the other passengers cheered. Welcome to Sydney 2000!

That night we ventured into the city of Sydney and joined thousands of others watching the games from huge screens in Martin Place and other venues dotted across the city. It was just one big party. On the train home, we got into conversation with other passengers about the events, everyone excited and animated. It was a city transformed – people talking to each other and interacting like never before. It was like the whole city was on happy pills.

There’s so much great stuff to recall from those games, including the great tally of wins and medals of course, from expected places and unexpected ones, and other cherished moments as well, like Eric the Eel from Equatorial Guinea struggling through his heat of the 100 metre freestyle,  barely able keep his head above water at the end but with the whole stadium going crazy and the whole of Australia urging him on. We witnessed the making of Ian Thorpe, the revelations of beach volleyball, that wild high jumper and our adopted Russian pole vaulter, and the straight-shooting Simon Fairweather of gold medal archery fame (who incidentally came around for dinner at our house some months later, the then partner of a girl my hubbie used to work with, when we discussed how the bow makes a permanent dint in archers’ noses!). And of course we celebrated Cathy Freeman’s legendary win in her green space suit in the 400 metres in a moment forever etched into our collective memories.

And to top it all off each evening, we got to spend two hours with Roy and HG on The Dream, and listen to their hilarious gymnastics commentary which traversed and sometimes confused the rest of the world and introduced new words into Australian lexicon, like battered sav and hello boys, and a fat-arsed wombat became just as famous as a mascot for the games as Matilda the ‘roo was and perhaps more beloved. 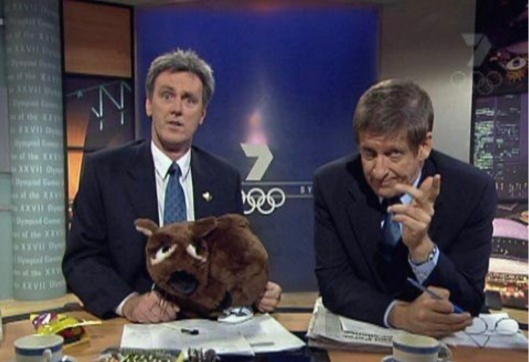 It’s very different this year, which should be an Olympic year. It must be incredibly disappointing for all those athletes who were training for this year’s event and who had their dreams snatched from them. Hopefully they’ll have another chance to make another games and reach those dreams.

Thanks for the memories, Sydney 2000 – you were bloody great. In fact, in the inimitable words of Juan Antonio Samaranch, you were the greatest games ever.

What about you? Did you go? What did you get to see?

13 thoughts on “Remembering Sydney 2000, the greatest Olympics Games ever”